Canal walking is a different fish. There is the initial elevation to conquer—canals often sit high up in the countryside, like, maybe, even up to twenty meters. And then there is the all too occasional lock which requires at least another few feet of uphill struggle. Meanwhile there are large stretches of straightness, mixed in with curves, but predominantly featuring a uniform flatness. It's hard work. Your pace, especially if Phil is carrying your bag in his blue hatchback (not quite what I expected to turn up to collect our luggage this morning), is only about two times faster than the West Highland Way. As long as you don't get a headwind—that can slow you down quite insignificantly. 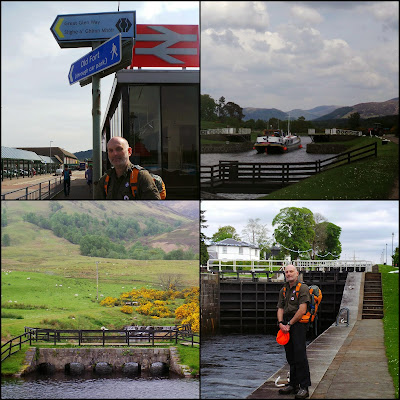 And then there is the issue of having a bad travel agent. Me. I booked the accommodation based on a website who mileage I was pinching, but in a sense of a map. A map would have shown me that Spean Bridge is not actually on the Great Glen Way, but rather a three mile hike on roads away from it. Roads which were traversed by wanna-be rally car racers. Tomorrow a map will show me that InverGarry is on the wrong side on the loch to the Way, and will also require road walking, but I will tell you about that tomorrow. And the next day I will tell you about how just because it says '400 mts from the GGW (Great Glen Way)', doesn't mean that is four hundred accessible meters, it could be four hundred meters of old growth forest on a cliff side. Mmm. Anyway. If these things didn't happen. I would have only canal walking and forest track walking and the one horsefly bite to tell you about, so thank your chosen deity or belief entity.

Enough silliness. Scotland let its sun out today. Ironically someone wondered aloud to us whether it was maybe a little warm for hiking. That tropical eighteen degree weather can be a bit of a killer. We had to resort to ice cream. 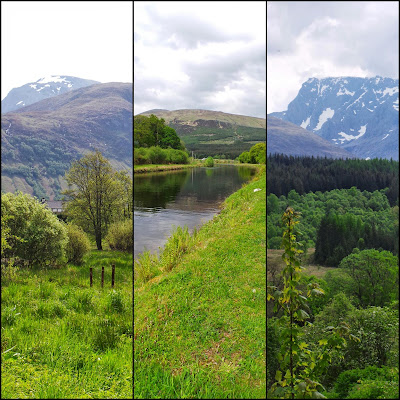 Canals and mountains along the Caledonian Canal, including the elusive top of Ben Nevis on the right


And how's this for oddness. We stayed in a magnificent B&B in Spean Bridge (The Braes Guest House—highly recommended), where we were warmly greeted into a gorgeous room and then presented with plunger coffee and biscuits and cake in the guest lounge. That's not the odd bit. The host, Phillipe, is South African born, in the same year of life as me, lived in the same area and, we believe, may have attended the same school. So a girl leaves South Africa, moves to Australia, walks all the way across the UK and meets a man who left South Africa, travelled the world and bought a B&B three miles for a long distance walking track. And just maybe, they went to primary school together. Odd, eh?