Two unusual things will happen on this trip: I'll walk a route I have already walked but this time with another person, and, I will walk places I have never been and share the experience, which I have never done. Ultimately it makes you look at things in a different way. Do you like to travel alone? Or would you prefer to be with someone? There are benefits to both. I am a bit of a loner. People—even the ones I rather fancy—tend to drive me a little mad. So I love the difference being all alone makes. But there is something about any given holiday in which the best aspect of it is not during it, but rather in the retelling of it to others. Travelling with someone gives you the sounding-board to bounce that off, rather than relying on the kindness of those who stayed at home and now have to listen to you clap on and on about how amazing your holiday was. And, god forbid, see all the photos. 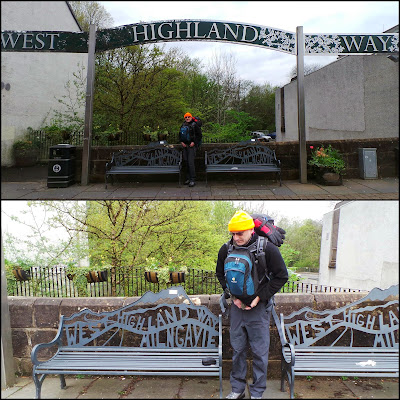 Top: One of two photos taken today—the start of the West Highland Way
Bottom: The other

Today we (re)walked the first day of the West Highland Way, a ninety-six mile, long distance path from Milngavie, just north of Glasgow, to Fort William and the joining point between Loch Lomond and Loch Ness. On my last trip I actually finished in Inversnaid, a tiny town a few nights stay away from where we are now. I was, like I unfortunately am now, not well. I just had to get to drugs! And so I caught a ferry and a train out of there and called it quits for the trip. Normally I would start again where I had left off, but the next day out of Inversnaid is a notoriously difficult day—walking precariously along the cliffed edge of the loch. It was a little much to expect the boy, on his first day of lugging around a huge pack, just for the fun of it (or the later reminiscences) to do. So instead I gave him this long, but relatively easy-terrained day. And a pre-booked hotel at the end of it (The Winnock Hotel, Drymen: big bed all to myself, while V—— struggles in the little bed (little bed, little pillows, little man, little jaws—little in-joke referencing the absent and greatly missed Darby—and Lollii); great large bath for slight muscle relief; sufficient (but not amazing) dinner in the bar while Liverpool slaughters Crystal Palace on the TV). The next couple of days are far shorter (although tomorrow has a killer hill!), and so the theory of easing into it, should become more of a reality.

How did he fare? Not to badly, he says. Feet a bit sore, back seems alright. 'Did he enjoy it' gets a non-committal 'yeah'. How did I fare? I did moderately well being a social animal instead of a recluse. And I only really threw a wobbly towards the end of the day when I had to physically demonstrate the 'travel at the pace of the slowest boy scout' theory going wrong by stopping for as long as he did every time he stopped to wait for me and then started again when I caught up, and so ending up ages behind him. Make sense? If you are quicker, and stop all the time to wait for the slower one to catch up, the person behind gets tireder and tireder because they never get to stop. a time comes when everyone needs to be behind, and keep pace with, the slowest person. He wore the whole Boy Scout uniform with scarf and toggle today. I was so proud. But he never was a scout and so a practical (and sarcastic) display on my part was required (according to me). I think we have that sorted. Now, to sleep, with the hope of resting some of these pains and sniffles away.

Sharing a love of talking about travel with: