I visited Glasgow last in about 1994. They kicked me out of the country, just for being honest, while I was there. Well, that is how I tell the story. What I recall of Glasgow from that time was snow, wallpaper, glasshouses and curry. Luckily, this time there is no snow. 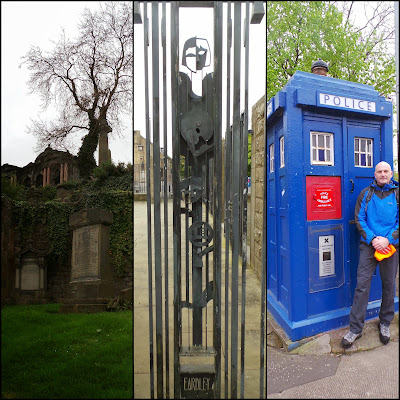 Left: the Necropolis
Centre: Art Nouveau Ironwork on a garden in the East End
Right: Policeman at a Police box, or, is it ...? The doctor?

Prior to taking the first steps on the rest of a walking journey, we have spent three nights getting over the flight and having a little squizz at Glasgow once again. Have to say, I am quite liking it. I've never utilised them before, but I am loving the hop-on, hop-off bus. It takes you round to all the sights, tells you all about them in nine languages and a ghoulish kids version, and gives you the opportunity to get on and off at the ones you fancy. We bought a two day ticket for fourteen pounds. The hardest thing was deciding, in limited time, which sights to see. On day one we did the science museum (completely culturally irrelevant, but loads of fun and interaction, and they had ferrofluid—google it, it is simply the most magical thing you ever did see). Then we visited the Necropolis, a hill high above the cathedral and looking out over Glasgow, on, or in, which sits some fifty thousand souls, dearly departed, for whome the most amazing monuments have been erected. For those who know him, you can imagine the ponderings on the ethereal nature of life and the futility of 'waiting for later' that this visit evoked in the boy.

On the train from London we had sat with a gentleman by the name of Andy who had made us a list of what he recommended we see in Glasgow. He had also pointed us in the direction of some of the best houses of curry in the city. Glasgow is renowned for being one of the best places on the planet for Indian curry. We went to a tiny little restaurant close to us, coincidently called The Wee Curry Shop. It was tiny, packed and we had to go to the pub for forty-five minutes before we could even get in, but it was the, no, let me correct myself, THE, best curry. Ever. The boy, in typical understatement said: 'Well, it was nice.' Admittedly it was quite spicy. I think he was sweating. 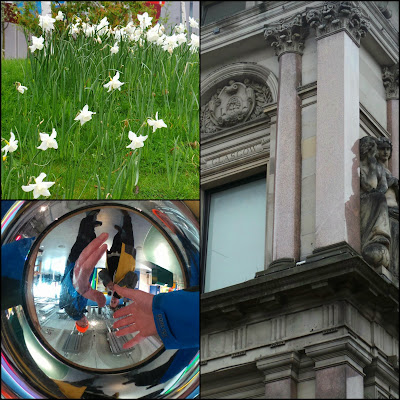 Top Left: Daffodils outside the Science Museum
Bottom Left: Strange perspectives in Selfies
Right: Glasgow is apparently one of the best places for Victorian architecture

The mad brownie uniform dash, the night shifts, the running around, the long flight, the Scottish summer weather have all conspired to give me a cold. I was a little less than lustrous for our second day of sightseeing in Glasgow. V—— relished and I wandered in the Riverside Museum, an amazingly designed building containing a transport museum, with a tall ship berthed alongside which you could board and explore. Then I relished and V—— wandered in the greenhouses at the Botanical gardens.

We shopped for dinner and spent the night in our flat. A friend told us about Airbnb. If you haven't seen it, try it. I just eavesdropped and told some ladies in a cafe there in Balmaha, middle-of-nowhere, Scotland, the same thing. It's effectively couch-surfing with a commercial aspect. You stay in people's rooms, flats, houses or castles. A huge range of amazing places to stay which are not hotels. We had a one bedroom apartment with a lounge, full kitchen, balcony, use of a leisure centre with pool, spa, sauna and steam room (which we didn't end up using), built in the old mill houses overlooking the Forth and Clyde canal and the city, all for less than a hotel would have cost us. It was a bit of a walk into town. But it's not like we couldn't use some training given the hundreds of kilometres we are about to embark on with no other physical build up! Tomorrow we say goodbye to this lovely bussed around, luxury apartmented, walking with only a day pack lifestyle and commence what we came to do. Deities help us! 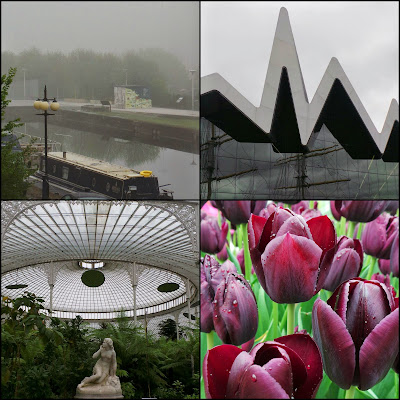 Top Left: View from our apartment; early morning
Bottom Left: inside the Kibble Palace, Botanic Gardens
Top Right: Riverside Museum with a reflection of the tall ship, the Glenlee, in the windows
Bottom Right: Plum coloured tulips at the Botanic Gardens