Well that did it! I think I have permanently lost some use in both of my knees! Whoo! They say that today's stretch is the hardest of the route. It is certainly the most arduous. It hugs the cliff-side around the Loch for about five miles, popping torturously up and down rocky paths, darkened under overhanging trees and damp and muddy for the same reason. But I had always known it was the worst bit, and so, in that strange way that superlatives have of negating themselves, I quite enjoyed it. All of me except the knees, of course. 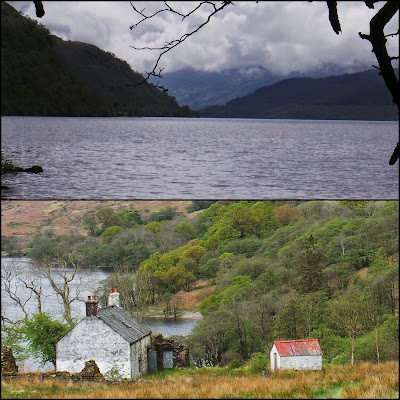 Top: Looking back down the length of Loch Lomond
Bottom: Doune, alongside the loch

As we came around one steep rocky decline, we came across some Dutch people lurking about. My initial thought was: 'Um, couldn't you find a pee-pee spot a little more off the path than that?' The thoughts got odder when another Dutch person popped his head around the corner and asked if we had a torch. 'What have you lost?' I enquired. Apparently they had lost a kid goat with a broken leg. They had tried to grab it to take back to Inversnaid Hotel where Animal Rescue would collect it, but it had got scared and rushed off and fallen into a cave. Torch out, kid out, Dutchies on their way out. All was good. 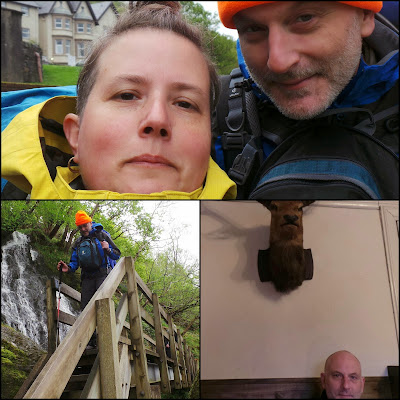 When we popped into civilisation at the campsite in Invernarnan, salt and sugar cravings took over and we sat down to ice cream, chips and soft drinks to energise ourselves for the five hundred meter walk to our hotel. The hotel is called the Drover's Inn. It was a place where superlatives had set expectations once again. I had seen reviews that said it was the dirtiest pub in the whole UK. (See how desperate we are to not camp? We booked despite that review!) We were given a room on the third floor (just cruel) called the Hoggs Suite (I dunno?). The Inn was built in 1705. I thought it was delightful. You got lost going around it, and sure, it did have a patina about it, but it had ghosts (possibly of the all the stuffed animals it had about the place, including a shark, a bear, an elusive Haggis, a two-headed sheep and the cutest little bunny head on a plaque that I ever did see). We had a shared bathroom with only a bath, and carpet on the floor (I can never understand a carpeted bathroom, especially when they don't provide a bath mat). It had character, and a definite air of having been around for a while, but I can imagine that some people would see that as dirtiness. We didn't see ghosts, but more mortifiedly, we also didn't see Eurovision. It is the first year in I-don't-know-how-long. Anybody know who won? Anyone with a blow-by-blow of the outfits? I hear there was a bearded woman. Eurovision never disappoints!