And here I am at the beginning again. Or the end. The place I finished last time I walked this way. Today was emotional. I threw a wobbly. I think there is an evil spirit in Rowardennen (which is ironic as the name, apparently, is a combination of words that includes an enchanted Scottish flower which wards off evil spirits!). I felt better once I left but I was still conflicted and it required a hissy fit to sort it out. Anyone who has followed along with any of my travels with the boy will know that I always have (at least) one. Maybe I am a spoiled brat. In the past walking has been a game I've played alone. I work well alone. I am able to have my good days and my bad days without getting crippling guilt about who has to witness it all. I can make decisions that affect only one person. I don't have to try and make all the decisions so they suit me and then resent other travelling partners for not making interactive contributions to the decision-making process. Alone means many things, but the biggest is the walking. Today I realised that without the ability to be alone in nature, in your thoughts, physically, the rest of what makes up this type of travelling is the bad stuff. (Ooh, I am being a whiner, aren't I?) I like the feel of pushing yourself physically but not so much that I like to carry that over-laden pack. I like the freedom that having no plan brings until it means sleeping in a field, on cold, hard ground, in the rain. I like the commune with nature, as long as it doesn't include torrential rain, blasting sun, headwinds or midges. But i put up with all those things if it means solitude in its purest form. Suddenly I had a bit of a problem—not quite sure why I didn't see it coming: I'm not alone! 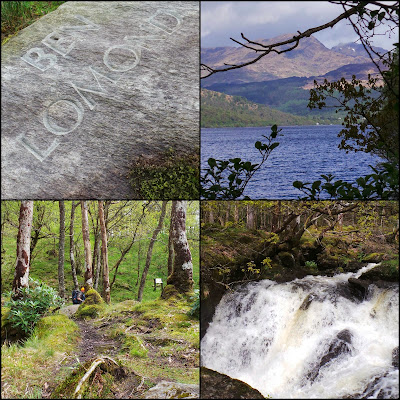 Top Left: National Park graffiti
Top Right: Glimpses of the Loch
Bottom Left: I can still find him a far behind me with that hat!
Bottom Right: Waterall at Inversnaid

I had the perfect plan. We catch a ferry and a train to Glasgow, hire a station-wagon, stop at a camping store and get a cheap blow-up mattress for the back of it, a couple of two-way radios, a second copy of all the maps (and, as a sweetener to V——, a new wrist GPS), stop at a home wears store and get a cheep sheet and doona (instant accommodation), and then every morning I start walking towards a destination with a much lightened pack, V—— drives to the destination, parks the car, gets his own much lightened pack and walks to meet me along the track. We get to spend (a lot of money?) time alone, and time together, we have accommodation if we need it and a way of getting to accommodation if that doesn't seem suitable that night. Brilliant. Except for the fact that V—— hated it. Always has. It's not the first time I've had this idea. It was the first time it had a station wagon, a blow-up mattress and a GPS. My mood hit gravel again. I walked off in front of V—— for an hour and a half. Enough in front that I couldn't really hear him behind me. My mood improved somewhat. His pacing did too. Then I did it again for another hour. Although I was a little worried during that hour that he would fall off a cliff and I wouldn't know. It's a tentative plan for the moment. It doesn't solve all the problems, but it may make it doable. I am sure many of you are reading this and wondering what on earth I am going on about. It's probably not something you will ever understand until you have walked fifteen hundred kilometres on your own and then tried to walk fifty with someone else. It is quite an amazingly privileged problem to have—I recommend it highly.

I do have a much more serious problem though: Historical Romantic Literature! I'm addicted to Kindle's Daily Deal. I do hold back as much as I can but when they offered up Tracey Brogan's Highland Surrender for ninety-nine cents a few days before I left for the highlands, I took it as a sign, and bought it. Now I can't stop reading it. And I am much too much of a literary snob to read historical, or otherwise, romance. It's a disease! Maybe it is my virus-addled brain at work and once the snot moves out I will be able to control myself. Although the denouement will have come and gone and the rivalling clans will be united by the love shown by these betrothed enemies so it will be a mute point anyway. I'm so ashamed. But I have to go read so I'm signing off.

Getting my fix of linky-parties at: