We started in on the bigger numbers again today. Where we have hopped from town to town along the way, most people we see are going between two and three points. We probably have a luxury of time they may not have. We are also old school (or just old), unlike about eighty per cent of the walkers (who are old too), and carry our own bags. But despite all the excuses in the world, I feel a bit slack. When we sat down after a seemingly easy five kilometres for our first break yesterday, a girl from Glasgow came past. She was feeling weary, but she had good reason. They had walked from Balmaha to Inverarnan the day before. That's twenty-one miles—including that horrific stretch from yesterday—and she had never done any training. It took us three stages to do the same! Mind you, she was considering catching public transport after six of her planned nineteen today. I think it is harder than it seems. We met another couple today who are quitting and heading back to Milngavie. Maybe slowly is the more sensible option. Maybe that is me just trying to feel good about being bad. 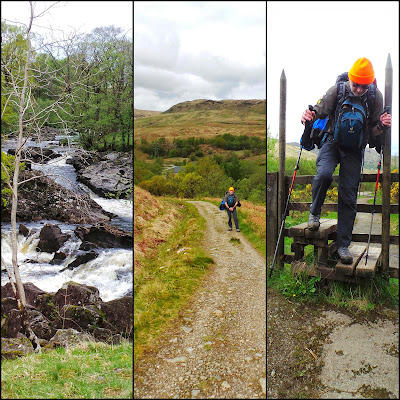 Left: Wild rivers running deep
Centre: It's looking a lot more moorish
Right: V——'s first stile
We did twelve miles. I had to play mind games with myself to get me to the end after the first five. My legs didn't want to work. I relied quite heavily on my poles. The first year I walked without poles. The second and third I had them, but I always felt that using them was, in some strange way, cheating. This year I think they are saving my knees, and my soul. They displace the energy. Sore arms at the end of the day yesterday spoke to that. If nothing else they make descents, especially in the descendingly timid, a much, much faster thing. I think they will be out a fair bit this year.

We stayed in a B&B in Tyndrum. It was V——'s first real one. He described the owner as being like a brigadier in the Second World War, Battle of Britain. Quoting V——, with a high British accent: Blue squadron will deploy their bombers here, here and here with the intent of knocking over Jerry by midday and returning to base for an early lunch. Doesn't really work in print! We dined in a (greasy smelling) establishment that had won best fish and chips in the UK for 2014. We both had haddock, chips and mushy peas. V—— scored it a 7.5; I gave it a 7 (the chips weren't fabulous, the fish was, the peas were in a paper cup—I'm funny about paper). Overnight the brigadier turned off the hot water (it seemed, from the lukewarm bath) and the heaters. Mmm, we weren't so fond of him the next day.