Anyone closely monitoring the blog will see that the increase in mileage from yesterday to today equals a grand total of one point eight kilometres. We woke up on the hard plastic mattress of Legolas and said 'Should we catch the bus?' And all parties answered 'Aye'.

I'm not even going to try and justify the reasons or make excuses. I am going to remind any cynics, and assuage my own guilt, by merely pointing out that Milngavie to Inversnaid has been traversed twice and that means that little and occasional cheats are allowable. 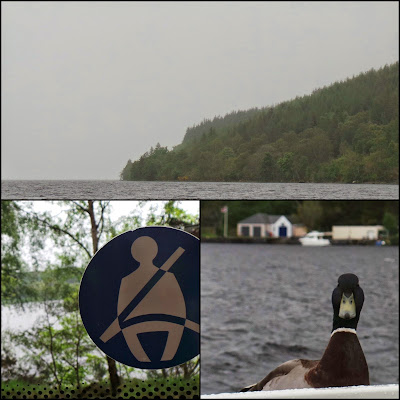 Top: On Loch Ness
Bottom Left: On the bus
Bottom Right: A visitor to the boat

We spent the day on extended breakfasts, small walks, extended lunches and a cruise with a true believer on Loch Ness. It's an odd thing to be the only people. In restaurants or on cruises of Loch Ness. David's afternoon was filled with the cruise ship passengers who were ferried up and around Loch Ness from Inverness to see all there is to see, but his two o'clock sailing was just V—— and I. David came to Loch Ness in 1968 as part of an investigative team looking at the possible things that Nessie could be. He is still there. His boat speil is practised and despite the more intimate setting of only two passengers which can sometimes become a more conversational thing, he stuck to the script which actually involved playing a video he had made. Complete with laminated signs which he periodically pointed at the screen that said things like 'That's me on the left', and ' Me in 1972'. It was really strange. And even though he had been through every possible thing that Nessie may or may not be and ticked them off as probable 'no's, there was a feeling you were left with that he still believed there may be something out there as yet unexplained. I couldn't help wandering if that doggedness was the reason his little signs pointed to an 'ex-wife' rather than a 'wife'. 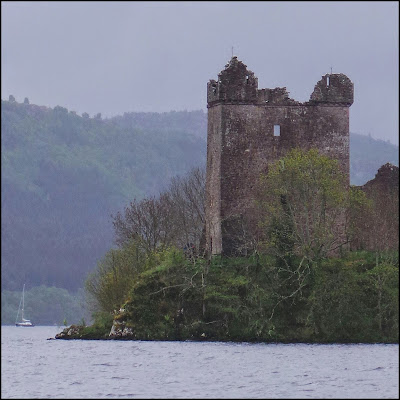 We must have been noticeably lazy in town all day. When we got to our B&B, Rory, our host, made the strange comment 'I know' to our saying we hadn't actually walked that day, but had, rather, caught the bus. Imagine living somewhere like a small Scottish village where everybody knows everything?
Good night to Drumnadrochit, good night to you.