We told Rory (last night's B&B host) of our dilemma about whether to walk the path or the road, the latter being a good four miles shorter. In order to not have the spectacle of our splattered bodies on his nightly television, he offered to take us up to Abriachan. That would make our day of walking on the path, similar in distance to walking on the road without the near-fatality misses. Worked well. I felt very grubby on the cream leather of his BMW.

One kilometre into the walk from our drop-off point was our first stop of the day. Through the forest we came across sign after sign proclaiming things like 'Hot Bovril', 'Beans on Toast', and 'Homebakes'. A couple of people had told me about this place. A sort of 'hippie' coffee shop that you 'just have to stop at'. Three malamute-mixes announced our arrival to our burly host, a malamute-mix in red-haired human form. And the loveliest man you ever did meet. They croft there, which, with the four minutes of google- based research I have done seems to be a sort of legal 'staking a claim' on landlorded property, particularly in Scotland where I believe most of the land is owned by a very few people. We had a lovely chat, a wonderfully strong coffee and funded another tree in the orchard. 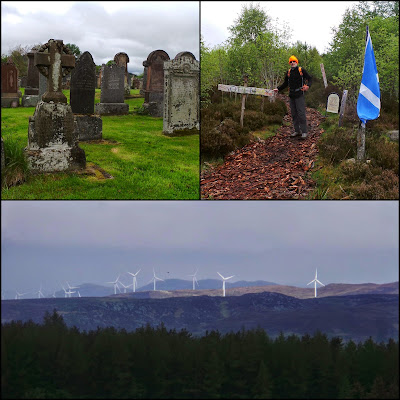 Top Left: Drumnadrochit Cemetery
Top Right: Abriachan Eco Campsite and Cafe
Bottom: Windmills in the countryside—I guess it's easier to think they're beautiful when you don't live under one

Rain came and went but it was one of those days when walking was joyous. I'm not sure if I have had the same space for circumspection on this trip. Even though V—— has gone out of his way to allow me the space, I still spend a lot of time worrying about whether he is okay and feeling a second presence. It's okay. It's just different. In some ways I think the last trip was the best trip and this one suffers by comparison. But ultimately the walking is like everything else in life—it's the same thing, day in, day out, minor differences in terrain or weather, but what makes the most difference is the mind you bring to it.

Knowing this is one thing, positively influencing it is another. Because if you can, you make everything you do joyous, or at least bearable. When I am back behind a desk in an air-conditioned box, all too soon, my day there will also be determined by the mind I bring to it. We fight it. We say we don't want to be 'there', or don't like doing 'that'. Everything becomes a wall that we bang our heads, painfully, against. We think about the future—the end of the day of walking, the end of the day of working. We wish our now away. I know this. Knowing doesn't equal doing. I admire people who can be so involved in the moment, who go so into each living minute that, pleasant or not, they enjoy it. They don't over-think things, they simply live. I would seriously like to stop over thinking things. I would like to be a river. Taking life along the natural flow. Water doesn't resist. 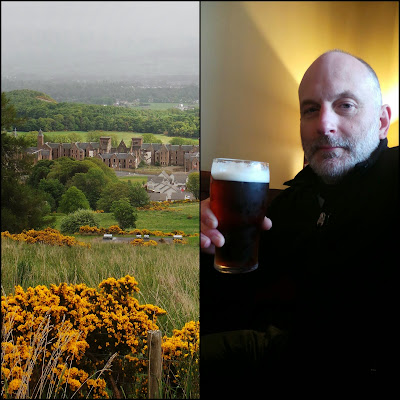 Left: Inverness, the final(?) stop
Right: A celebration, the start of a decision-making process

A few beers sometimes help the resistance to fall away—not always for the good—and we decided, once we were safely in the B&B, well oiled with bevies and waiting for dinner, to stop trying to force this river uphill. We decided to stop walking. More so, personally, I have decided to stop walking. I think it is time for something new. (Eek! What?) It doesn't matter that I don't 'finish'. This adventure was always about the journey. If the journey no longer entrances me, the destination becomes meaningless. I am writing this in hindsight, and it has taken me many, many days. For the next two weeks we will stay in just two places: a seaside resort in Scotland, and the urban insanity of London. I will over-think it every day. I will feel guilty, feel I am wasting time. I will miss the walking in some strangely masochistic way. I will feel that somehow I am still trying to force the river. The greatest guilt comes from the fact that this is such a privileged problem to have. I really am lucky. But I do have to find a way to make all this brow-beating work for me when I get back home. There are some other rivers that need sorting out back there too. Time to be a philosophical engineer. Actually, that is wrong. Time to stop being a philosophical engineer, and let the water flow naturally. I have a feeling this may drive me mad!