Long story. The 'transported to Gairlochy' wasn't cheating as such, it was accepting the kindness of our host to take us back to where we had officially stopped the night before—except for the fact that our accommodation was three miles from there. Of course, the fact that our host offered due to us asking if there was a bus back to said point doesn't need to be mentioned. 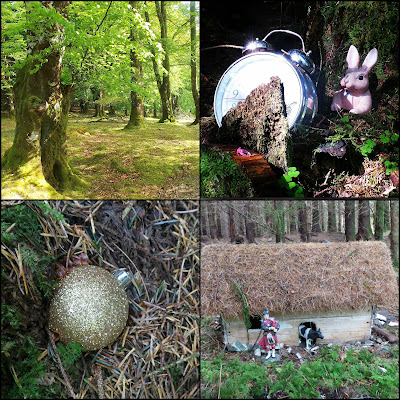 Top Left: A magical forest light before we found a fairy dell
Top Right: Down the Rabbit Hole
Bottom Left: People leave things for the fairies and they arrange them in the forest
Bottom Right: A Scottish tableau

The 'transported to Invergarry' was a different thing. Our morning's walking was splendid. We walked along the loch, found fairy dells, and even tolerated the incessant up and downs of the forest paths. But then everything ground to a halt. Maybe it is the sugar. Truth be known, or at least highly suspected, the main food group that we consume during walking-time is the sugar one. And you know what happens with that little high G.I. nightmare—the crash. Come Laggan Locks, a bus seemed a brilliant idea.

Aside: Riddle me this, but does Laggan sound like a word that may derive from 'lake'? And loch is too? So Laggan, situated on the north eastern end of Loch Lochy, as it is, is really Lake on Lake Lakey. No? 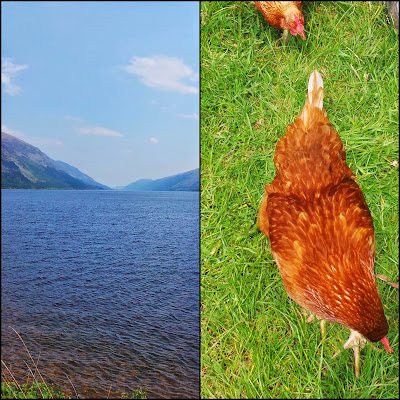 There is a bar in a barge at the locks. We stopped for a wee imbibement. And salt fix. An amiable couple asked about our adventures. We had been up a little from the road to see where the bus left from and just missed one, we told them. We're walking, but we've had enough for the day and we are riding the rest of the way on the next bus. They gave us the time of the next one from the timetable they had. It was due 1714. We had a half hour. An hour and a half later we were still waiting. Apparently it was the new day for the timetable. Maybe they thought no-one would notice the missing bus in the (unannounced—it seemed, from talking to locals) change. One half of the timetable couple came, caught his bus back to Gairlochy, retrieved his car and drove back to collect wife and dog (these are the only buses I have yet to experience in the UK which don't allow the furred friends aboard). They very kindly ended up giving us a lift into Invergarry. Closely followed, of course, by the bus. There is a part of me that screams out in my subconscious, loud enough for my conscious to hear: 'It's because you didn't walk!' I don't know if that is true.